View stunting data visualization for countries around the world.

Eduardo Munyamaliza, Executive Director of Rwanda Men’s Resource Center (RWAMREC), shares a story of how the women at the health clinic where he brought his child took pity on him. He was the only man among 300 to 400 women there with the children on the designated vaccination day. The women thought he must be a widower. When they learned that was not the case, they advised him that his wife must have bewitched him. Eduardo shares this story because it not only says something about the women’s attitudes, but it also explains why men would feel self-conscious or embarrassed about bringing their children to the clinic. 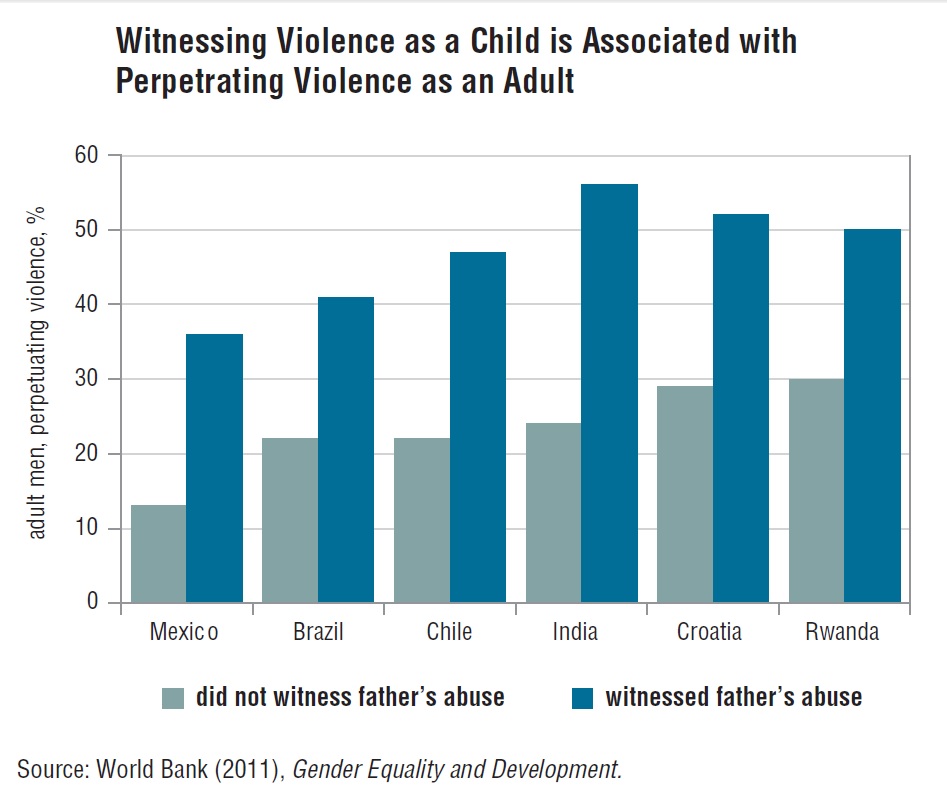 RWAMREC was formed to help men cope with these emotions and encourage them not to reject the natural caregiving urge they feel. Its objectives are threefold: inspiring men to become full partners in maternal and child health, empowering fathers to raise daughters and sons equally, and reducing gender-based violence. RWAMREC is spearheading the MenCare campaign in Rwanda. Now operating in more than 20 countries, MenCare was launched in 2011 by the Sonke Gender Justice Network and Instituto Promundo, nongovernmental organizations founded in South Africa (2006) and Brazil (1997) respectively.

Women and men both stand to gain as gender inequalities break down. But that message is not usually shared with men. Gender equality seems like a zero-sum game, with men expected to make concessions but receive nothing in return. “The norms are there to protect a man’s privileges,” says Eduardo of RWAMREC. “If you tell him to give these up, what are you giving him in its place?”

What men stand to gain by participating more in caregiving are happier, closer relationships with their wives and children. Beyond these less tangible benefits, men’s own mental and physical health will improve as maternal health-related outcomes improve and child development outcomes improve.

When men do not see how they gain, women become vulnerable to reprisals. Men who already feel marginalized economically may attempt to hold onto their role as head of the household more tightly than ever and lash out against what they experience as one more form of humiliation. A multi-country survey of more than 15,000 men in 10 countries—the International Men and Gender Equality Survey (IMAGES), coordinated by Instituto Promundo and the International Center for Research on Women—found that men who commit violence against women “tend to buy into stereotypical notions of masculinity.”

Bread for the World Institute spoke to a participant in the MenCare campaign in Rwanda who discussed his transformation. His father was a violent man who had ruled the household by force during his childhood. Although he was not a violent man like his father, he thought of his role as strictly providing his wife with financial support to manage the household. He used not to think it was his responsibility to accompany his wife on visits to the clinic. But he was there with her when their son was born. He had felt conflicted about what seemed to be expected of him as a man in caring for his wife and child. MenCare helped him to realize there is no shame in wanting to hold his baby. He now bathes the baby. He even sings to the baby, something his father would never have done.