Immigrants in the U.S. Food System

By Andrew Wainer, Bread for the World Institute

More than 70 percent of all hired U.S. farm workers are foreign-born, mostly from Mexico, and about half are undocumented.1 Many arrive in the United States to escape poverty and hunger in their homelands. They can earn more money in the United States, but they still live on poverty-level wages and suffer from food insecurity.

Maria, an immigrant from Mexico who works harvesting vegetables, is an example of the sacrifices that immigrant agricultural workers make to feed their families. Maria came to Florida para salir adelante — to get ahead. She arrived as a teenager in the mid-1990s, escaping a life of poverty on her family’s Oaxacan corn patch.

In south Florida, she worked seven days a week filling bins with squash, tomatoes, beans, and cucumbers. She and her husband envisioned a future for their family that was out of reach in Oaxaca, one of the poorest states in Mexico. Neither of them enjoyed working in the Florida fields, but without papers, it’s all they could do. “That’s why we came here — to work,” said Maria, now 34 years old. “In the factories or restaurants they ask for papers, but in the fields no.”

In 2008, when the country plunged into a deep recession, agricultural work in Florida grew scarce. To supplement their income, the couple would travel north to plant tomatoes during the Florida off-season. In 2010, Maria couldn’t go because she was pregnant, so her husband went to Ohio alone. The family has not been together since.

Traveling by bus on his way back to Florida, Maria’s husband was stopped by immigration officials and deported to Mexico. “He wants to return, but it’s very difficult,” she said. “They charge $4,000 to $5,000 to cross the border. This is money I don’t have.” 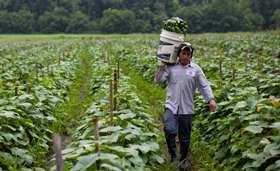 The poverty rate for farm worker families has decreased over the past 15 years, but it is still more than twice that of all wage and salary employees combined, and it’s higher than that of any other general occupation.

Photo: Laura Pohl/Bread for the World

Maria thought about going back to Mexico. For her U.S.-born children, Mexico is an unknown and unappealing destination; they’re American in every sense of the word. Despite Maria’s fulltime job, the loss of her husband’s income means that Maria’s daughters, who are citizens, depend on federal nutrition programs. Maria herself relies on support from civil society organizations like the Farm Worker Association of Florida. She continues to work in the fields. For the sake of her children, she’s going to stay in the United States and hope for the best.

Some version of Maria’s story is true for thousands of immigrant farm workers in the United States. The poverty rate for farm worker families has decreased over the past 15 years, but it is still more than twice that of all wage and salary employees combined, and it’s higher than that of any other general occupation. Hired farm work is among the lowest-paid work in the country.

In 2006, the median earnings of these workers — $350 per week — were lower than those of security guards, janitors, maids, and construction workers. Only dishwashers were found to have lower weekly earnings.

The agriculture sector is not alone in its dependence on newcomers. Immigrants play an important role in the food system from fields to restaurants—as dairy workers, meat processing workers, cooks, busboys, and more. More than half of food sector workers — both immigrant and native-born — earn poverty wages.2

A 2009 study3 by the National Milk Producers Federation (NMPF) found that half of all dairy farms surveyed used immigrant labor, and 62 percent of the nation’s milk supply comes from farms using immigrant labor. Research on the impact of immigration on the industry found that a 50 percent reduction in foreign-born labor would result in the loss of 2,266 dairy farms.4 As with other jobs in the food system, the outdoor work and irregular hours deter many citizens who have other labor options. One article quotes a California dairy farmer as saying, “I haven’t had a non-Hispanic want to do this work in 10 years.”5

The animal slaughtering industry employed 486,000 workers in 2010. Census data indicate that one-third of meatpacking jobs are done by immigrants, although the percentage may be much higher due to underreporting.6 According to the Bureau of Labor Statistics (BLS), “Meatpacking is one of the most dangerous manufacturing jobs in the U.S., with injuries that include muscular trauma, repetitive motion disease, cuts, and strains.”

The importance of immigrants to food production doesn’t end on the farm or in the dairy or slaughterhouse. Out of about 12.7 million workers in the restaurant industry, an estimated 1.4 million or 10 percent are foreign born, according to the BLS. Some are legal immigrants, while many are not. Hundreds of thousands of undocumented immigrants work as chefs, dishwashers, and busboys.7 Another study found that nearly 20 percent of restaurant cooks and 30 percent of dishwashers are undocumented immigrants.8 As with other industries, the proportion of unauthorized workers is likely larger than these studies indicate because of underreporting.

Only 20 percent of restaurant jobs pay a living wage, and women, people of color, and immigrants are often excluded from these living-wage positions.9 And like food processing jobs, restaurant work is much more dangerous than other sectors. In 2011, the Centers for Disease Control reported restaurants as the third most frequent setting for outbreaks of foodborne illness (after cruise ships and long-term care facilities).10 Life for immigrant workers in the food system is tough for many reasons—low wages, irregular working hours, dangerous working conditions, and increasingly, immigration enforcement measures that push unauthorized workers out of their jobs. Given the challenges facing laborers, many immigrants choose to start their own restaurants or open their own markets catering to the immigrant community.

Entrepreneurship allows them more control of their working conditions and contributes food resources to communities that often lack them, turning food deserts into oases. For example, much of Detroit is a food desert, but the southwest part of the city known as Mexicantown— is traditionally home to immigrants and has become a food oasis thanks to immigrant food entrepreneurs. “In southwest Detroit you have…really large grocery stores that cater to the ethnic community,” said Hector Hernandez, executive director of Southwest Housing Solutions, a community development organization in Detroit. “They have fresh products. You don’t find these sorts of grocers in any part of the city.”

Unauthorized immigrants come disproportionately from rural environments in their home countries, where they grew their own food and raised animals to feed their families. Once in the United States, they gravitate to the food industry since they have this background and that’s where the jobs available to them are. Legalizing unauthorized immigrants will help them earn more money for their families and make larger contributions to the U.S. economy. The 1986 legalization measures led to an increase of 15 percent in legalized immigrants’ incomes over five years.11 This means not only that legalization reduced poverty, but also it contributed to the U.S. economy, since the legalized immigrants paid more taxes and had more money to spend on community goods and services. A 2010 RAND study on the effects of legalization found that it could, by removing barriers, make the labor market more efficient, helping both workers and employers. “Illegal status generates barriers that constrain the choices of both workers and employers,” the study concluded. “In this sense, legalization could be interpreted as a removal of such barriers, which could potentially improve… the overall efficiency of the labor market.”

Andrew Wainer is the Senior Immigration Policy Analyst in Bread for the World Institute.

2. The Food Chain Workers Alliance (June 6, 2012), The Hands That Feed Us: Challenges and opportunities for Workers Along the Food Chain.