ORDER THE REPORT
You are here: Home  >  Media Room

Washington, D.C., November 25 — In releasing the Hunger Report 2014: Ending Hunger in America, Bread for the World Institute president Rev. David Beckmann warned that reducing funding for food stamps by $39 billion, as the House of Representatives is pushing to do, would increase hunger for six million Americans.

“Only this Congress would think that Thanksgiving is a good time to make it harder for people struggling to feed their families amid a weak economy,” said Beckmann. “Instead of making detrimental cuts to key programs, which would only increase hunger in America, Congress should focus on creating jobs and spurring economic growth.” 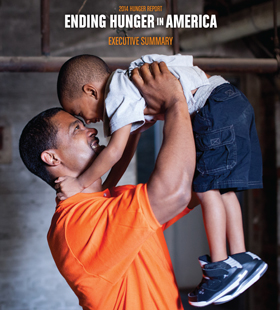 “Only this Congress would think that Thanksgiving is a good time to take away meals from people working hard to feed their families amid a recession,” said Rev. David Beckmann, president of Bread for the World.

Photo: Joe Molieri/Bread for the World

Congress voted twice in 2010 to cut SNAP (the Supplemental Nutrition Assistance Program, formerly food stamps) in order to pay for other priorities. The resulting $11 billion in cuts became effective Nov. 1, 2013. More than 200 million meals have been eliminated since then. Right now, Congress is considering more cuts to nutrition programs, ranging from $4 billion to $39 billion.

The 2014 Hunger Report proposes bold steps to end hunger in the United States by 2030. Returning the economy closer to the full employment level of 2000 would also decrease hunger from today’s rate of 14.5 percent. By making jobs a priority, it would be possible for President Obama and Congress to reduce hunger in America by 25 percent by 2017. In addition to investing in good jobs as a way of ending hunger, the report also recommends ending the political brinkmanship that led to the sequester, or automatic budget cuts, and focusing on investing in people, strengthening the safety net and encouraging community partnerships.

“Developing countries have made great strides towards ending hunger since 2000,” said Asma Lateef, Director of Bread for the World Institute. “However, U.S. hunger has increased, as evidenced by the record number of Americans receiving food stamp benefits today.”

The 2014 Hunger Report calls on the U.S. government to work with the international community to establish a universal set of goals to succeed the Millennium Development Goals (MDGs), which expire in December 2015. New global development goals must include ending hunger and extreme poverty and achieving global food security and good nutrition for all by 2030.

Speaking at the launch of the 2014 Hunger Report were Dominic Duren, Director of the HELP Program of Cincinnati; Barbie Izquierdo, a hunger activist and mother in Philadelphia’s Witnesses to Hunger program who was featured in the 2013 documentary “A Place at the Table;” and Sharon Thornberry, Community Food Systems Manager for the Oregon Food Bank. John Carr, Director of the Initiative on Catholic Social Thought and Public Life at Georgetown University, served as moderator.

The Hunger Report, Chapter by Chapter

Executive Summary for eReader and iPad