Not everyone is convinced the U.S. economy can achieve full employment. Newspaper stories quote employers who struggle to find skilled workers to fill jobs. “They don’t have the skills,” goes the refrain. Frustrated employers appear regularly in these articles to provide a touch of empirical evidence and lend an air of credibility to the skills-gap theory. In 2011, according to a report by the National Association of Manufacturers, there were 600,000 manufacturing jobs that could not be filled because workers lacked the right set of advanced skills. President Obama, during the 2012 campaign, often invoked the skills gap to describe the challenges facing the U.S. economy in coming decades.

Today, the United States has more college graduates than ever before—30 percent of the population, up from 26 percent a decade ago. Yet unemployment rates for most college graduates in the STEM fields (Science, Technology, Engineering, and Math)—the crème de la crème of the country’s skilled workers—are still higher than they were before the recession began in 2007. See the chart below.1 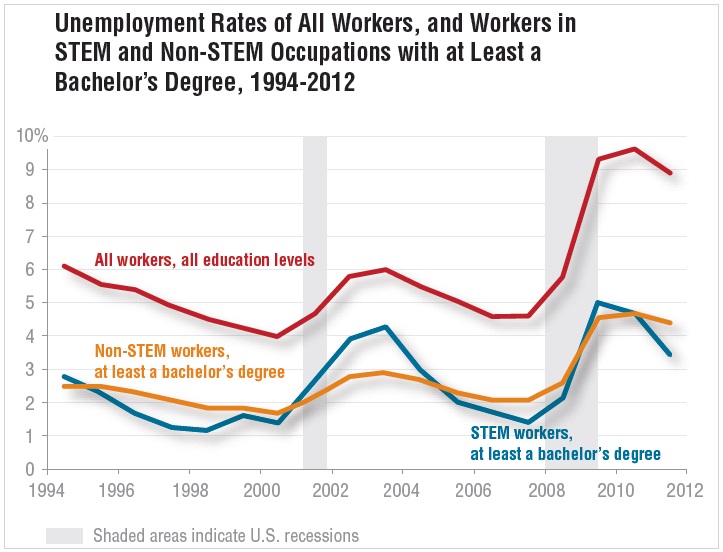 If employers were having trouble meeting customer demand, we’d expect to see them schedule more hours for their current workers. No evidence exists for longer workweeks, according to the Department of Labor’s Bureau of Labor Statistics. Moreover, if there were a labor shortage, it’s not being reflected in wage rates. Economics teaches us that if the supply of qualified workers were limited, those few workers who had the desired skills would be able to command higher wages. There is no evidence of rising wages in any sector of the economy.

Mark Price, a labor economist at the Keystone Research Center, dismisses manufacturers’ complaints about the shortage of skilled workers. “If there’s a skill shortage, there has to be rises in wages,” he says. “It’s basic economics.” Employers don’t want to pay higher wages, or more likely they are not willing to fill jobs in a still weak economy.  In 2012, the gap between what the economy produced and what it could produce at full employment was $995 billion. Given this yawning output gap, employers are not likely to rush into rehiring workers they let go during the recession, much less think about hiring workers to fill new positions.

The skills-gap hypothesis is troubling because policymakers can use it as an excuse for government not to take the lead in job creation. After all, if high unemployment is due to significant skills deficits among U.S. workers, the solution must be education and training. But unemployed and underemployed people can’t wait until a vaguely defined group of workers upgrades its skills—and the country doesn’t need to. In the late 1990s, the economy was at full employment. This was not because large numbers of workers suddenly became more educated and better trained.

The Congressional Budget Office estimates that the economy must add approximately 90,000 new jobs a month just to keep up with population growth. The last two cycles of growth beyond what’s needed to keep up with the population have been fueled by asset bubbles—stocks in the late 1990s, housing in the mid-2000s. The economy now needs to move forward driven by something more sustainable than bubbles. Policymakers should be asking what that something is and starting to invest in creating job opportunities there.

This article is taken from Chapter One of the 2014 Hunger Report, Ending Hunger in America. Click here to read all of Chapter One or the full report.